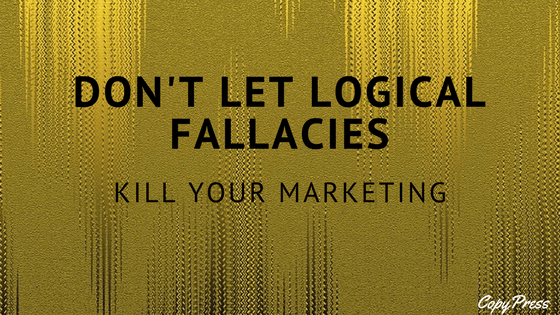 You probably dabble in persuasion on a daily basis. Maybe it’s when you need to convince your kid to put down the candy bar they keep trying to grab at the grocery store. Or maybe it’s when you present a proposal to your board. Marketing, at its core, is an exercise in logic and persuasion. Your goal is to lead a consumer down a path of ideas to a destination where your product or service becomes the logical solution to their problem. You do this by engaging in persuasion: making arguments and supporting them with substantial evidence.

If you’re going to win over your audience, your arguments should be firm and your evidence convincing. If you let logical fallacies slip into your persuasion, they will weaken your argument and damage your credibility. Even those who can’t specifically isolate and identify one fallacy or another can often recognize the holes in reasoning, even if only through intuition. Keep reading to learn more about how logical fallacies creep up, and a few specific fallacies you should look for in your marketing.

What Is a Logical Fallacy?

“Logical fallacy” is a phrase that people like to throw around without really understanding what it is. Some may claim an argument is fallacious, but they can’t point to any holes in the reasoning; they just don’t like the argument. Thus, a clear definition is needed. A logical fallacy is a flaw in reasoning that either weakens the reasoning or makes it altogether invalid. Sometimes these fallacies avoid the argument at hand, sometimes they ignore important evidence, and sometimes they present pieces that simply don’t fit together.

Fallacies can appear in your reasoning for any number of reasons, most of them likely unintentional. For example, leaving a significant hole in your reasoning may come from a lack of awareness of evidence or just plain laziness in argument. One fallacy, which we’ll explore in more detail below, often appears when frustration with the opposition distracts from the argument and redirects the focus to the opposing individual. Perhaps the best way to avoid logical fallacies in your own persuasion is to understand and be able to recognize them. 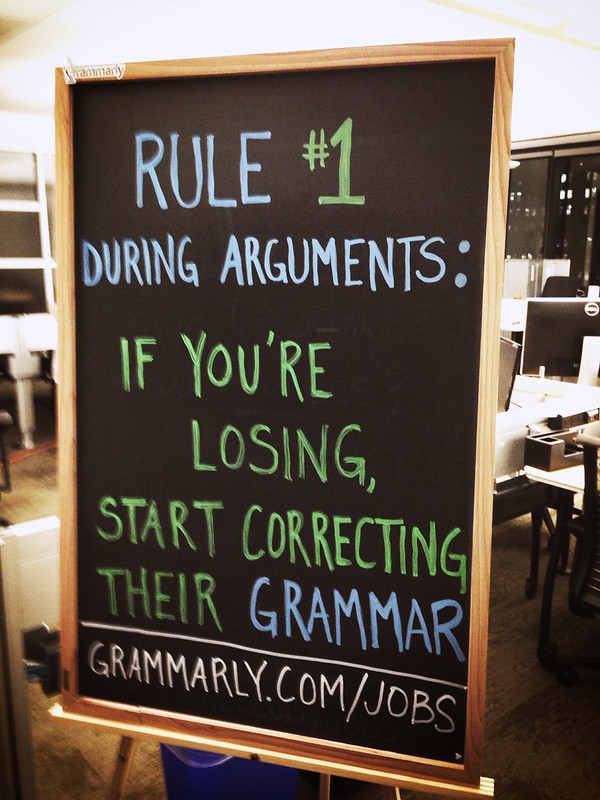 The ad hominem fallacy is one of the easiest to recognize. When an arguer uses this fallacy, he or she attacks the opposing individual or group instead of addressing the present argument. We see this often in politics, where many politicians focus on dismantling the image and credibility of their opponent rather than focusing only on relevant issues. In marketing, this fallacy may appear when a business spends more time discussing the negative aspects of their competitors rather than making an argument and presenting evidence that make their business appear as the logical solution.

In any kind of competition, ad hominem can creep up. We get focused on conquering our competitors, and that focus can sometimes seep into our campaigns. To avoid this fallacy, evaluate your efforts often. Are you drawing unnecessary attention to negative aspects of your competitor? Are you more worried about dismantling your opposition than with building high-quality, persuasive content? If so, it’s time to shift your focus.

Say that five times fast. Really. It’s fun to say. The post hoc, ergo propter hoc logical fallacy may be harder to identify in your marketing than an ad hominem fallacy. This Latin phrase translates to “after this, therefore because of this.” The fallacy occurs when an arguer assumes that because one event follows another, the initial event caused the second.

Post hoc may appear in your marketing when you find that, after a homeowner began using your product, they felt their health improve. Simply because the health improvement occurred after the homeowner bought your product doesn’t mean your product caused the improvement. This example may not be as ridiculous as it seems, because we generally like to try to find correlations, especially when those correlations can benefit our business. Much of the time, however, no correlation exists, only a coincidence. Maybe your client started sleeping more or eating healthier. Maybe it had nothing to do with your product.

The easiest way to avoid post hoc is to cover all your bases when there seems to be a correlation between two events. Gather substantial evidence, comb through data, and use representative samples. Your product or service may enhance your client’s quality of life, but make certain that you can prove the connection before making the argument.

Also known as the all-or-nothing fallacy or the false choice fallacy, false dichotomy may be the fallacy we fall victim to the most, possibly because it’s presented to us so often that we don’t recognize the fault in it. False dichotomy occurs when an arguer gives an audience two solutions to a problem, then dismantles one solution so that the other seems like the only logical choice. The fallacy creates an illusion of only two choices, then manipulates the audience toward one desired outcome.

Society likes to present us with binaries. You’re either Conservative or Liberal. You either like Coke or Pepsi, “Star Wars” or “Star Trek.” In reality, however, there are often more than two choices. Let’s say you’re trying to sell solar panels. A false dichotomy fallacy presented to your audience may look something like this: You want to lower your energy bills, so you can either install solar panels or vastly limit the use of your HVAC system. A choice is presented, but no one wants to give up the comfort of their HVAC system, so installing solar panels seems like the logical choice. There may, however, be at least one other alternative.

Avoid false dichotomy by avoiding either/or scenarios. Don’t manipulate your audience into thinking there are only two options for them. Instead, present a persuasive argument with plenty of evidence for why your audience should choose your product or service amid their many choices.

You’ve got everything going for you. You have something that can satisfy your audience, so show them why they need it. You can do better than to rely on faulty reasoning.