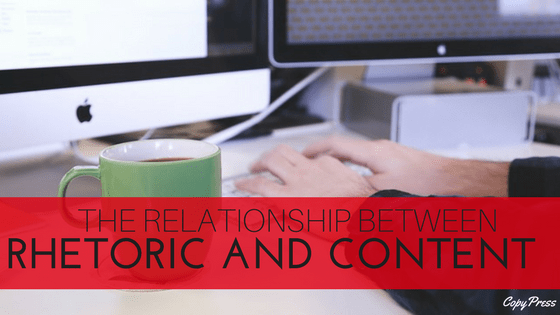 Rhetoric. It’s a word you may not have heard much since your college days, and yet, it permeates everything around you, even if you don’t realize it. Maybe we avoid discussing rhetoric because of its complexity. Maybe it’s just the fact that anything theoretical makes our heads spin. But as difficult as it may be to capture, understanding rhetoric gives you a new tool in your marketing utility belt.

The truth is, it’s pretty safe to say that many of the decisions you’ve made, maybe even just today, are a result of rhetoric, even if you had no idea you were being influenced. Employ rhetoric in your marketing strategy and content development, and you’ll be able to guide customers and readers toward both their goals and yours. 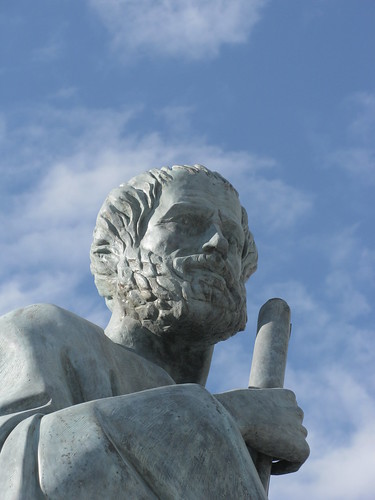 Here we go. Into the belly of the beast.

Much of the time, people use “rhetoric” to refer to almost any kind of persuasion. But with Inigo Montoya, we can all say, “You keep using that word. I do not think it means what you think it means.” Persuasion may be a part of rhetoric, but rhetoric is certainly not an umbrella term for all kinds of persuasion. Some call rhetoric the art of persuasion, while others may think it’s simply effective speaking and writing, but even still, these definitions are limited. “Art of persuasion” is more than vague, and “effective” is completely subjective. So, where does that leave us?

Plato called rhetoric the “art of influencing the soul through words.” This may get us a little closer to the mark. Rhetoric doesn’t always seek to immediately persuade someone to another’s point of view. Instead, it seeks to influence, to set us on a path, to point us in a certain direction.

Before continuing, however, we should address an important question: if rhetoric is all about influence, what makes it different from manipulation? There certainly isn’t a clear line, and it can sometimes be difficult to distinguish between the two, but while rhetoric certainly spotlights certain ideas and events, as we’ll continue exploring, it doesn’t warp, corrupt, or distort those artifacts. Manipulation, on the other hand, seeks to influence through false representation of those ideas or events.

How does Epideictic Rhetoric Work?

Think of your favorite historical movie, or at least one that was based on or around true events. Most of the time, especially since World War II films are so popular, the vast majority of the audience of these films weren’t alive, or at least weren’t present, for the events depicted in the film. So why do we all walk out of the theater misty eyed and contemplative? What makes those films generally more effective than a documentary? Because they employ epideictic rhetoric.

The core of epideictic rhetoric is how it brings issues into the present for the audience. The rhetoric makes an idea or event visceral and close. World War II may have happened over 60 years ago, but these films make the events present right before our eyes. But the power of the presence doesn’t lie just in the presentation of something that happened a long time ago, but rather in how the audience identifies with the rhetoric (or in the case of a film, the characters), and is able to put a part of themself in the shoes of another.

As identification takes root, the audience can imagine themselves in the place of the rhetorician, the reality the rhetorician is presenting, and so on. No clear argument is made, but the audience leaves touched, influenced. And while the rhetoric may not make a clear, commanding argument, it still has a clear purpose: to influence future decisions. It sets the audience on a path where their decisions will be affected by the rhetoric they interacted with.

Influence is great and all, but isn’t that the game of politicians and lawyers? We tend to associate a somewhat negative connotation with the word “influence.” After all, no one wants to be influenced. We like to think that every choice we make is completely independent, and saying a decision was influenced makes it sound like it was never our decision in the first place. But again, influence, like rhetoric, is different from manipulation. The influence of rhetoric seeks to present ideas for the audience to do with them what they will.

That leads us, finally, to the relationship between this big idea of epideictic rhetoric and the content on your website. We rarely simply say, “buy this.” Instead, our marketing efforts should (hopefully) lead the customer to say, “I need that,” or, “I want that,” without too much pushing on our part. Epideictic rhetoric helps us accomplish that.

“The 2017 [insert vehicle here] has many interior features, including a rearview camera, automatic rear window shades, and smartphone connectivity.”

“Keep your child cool, comfortable, and healthy on those long trips to grandma’s with the [insert vehicle here]’s automatic rear window shades.”

While it’s entirely possible that the first example will lead a parent to consider that the automatic rear window shades will keep their child cool, the second example makes the idea present and identifies with the audience by praising (or, acknowledging) values that a concerned parent would have. Content should seek to identify with a core audience and help them feel like you understand. That’s all what we want anyway, isn’t it?

Many times, the content may still involve a more direct call to action that leads to an immediate decision, but it often isn’t the call to action that ultimately makes the difference, it’s the fact that you were able to connect with the audience, illustrate that understanding, and influence them toward finding what they’re looking for.