I think it’s safe to say that we’ve all been here before: You are busy at work – attending meetings, making a business call, sending that important email, and waiting to hear back from “Johnson” about whether or not to go ahead with that proposal then…. Silence…. Where did Johnson just go? You sent the email to the appropriate address, there were no mistakes. Well let’s wait a day, maybe he is busy. Then a day goes by, a week goes by. Okay try sending a courtesy follow-up email. Still Silence. What the heck happened?! I know for us connectors, we have been there more than once, and the wait can become painstaking. Luckily- with the help of Social Media Outlets, traditional email isn’t the only way to contact the person you are looking for. Here, I highlight 3 different success stories that us connectors have had, using three different forms of Social Media: Twitter, Facebook, and Google +.

Is That a Bird Chirping? No it’s a Tweet!

When traditional email seems to be striking out, I like to turn to Twitter to get in touch with bloggers. It’s a great way to send exactly what you need to say, in 140 characters or less – so it helps avoid all the fluff and jargon that is typically used in emails, and goes straight to the punch. Twitter is also a great resources when looking for specific details from a particular editor of a large site, where their might be multiple contacts, now you can focus specifically on just one editor to get the job done. One of our Outreachers, Jessica Edmonson, has had one success story in particular that I’d like to share.

“I emailed this blogger a guest post pitch. I also followed up several days later and still didn’t get a response. So I then reached out to him via Twitter to see if he’s been getting my emails or if they’ve landed in his spam filter. Turns out he never got them but was interested in letting me guest post because of my Tweet. I then got in contact with him in email after this Twitter conversation and sent him a post that he’s now interested in publishing.” – Jessica Edmonson

Okay, well maybe not ACTUALLY stalking people on Facebook, but Facebook does provide some great resources to find more background information on the individual or group that you are trying to locate. It also provides another resource to send a personalized message, or a post on their wall. It is a good idea to become their friends on Facebook, or Like their Website’s page, since you are virtually trying to befriend them to get your article posted on their blog. Personally, I have had great success using Facebook to get in contact with bloggers.

I have used Facebook on several different occasions to find out contact information, send messages, and find the location of the blogger. Having grown up in New Jersey, went to the University of Maryland, lived in the D.C. metropolitan area, and having spent two years in San Diego, knowing their physical location can build some great relationship starters and help gain familiarity and credibility as a source.

Finally there is the mysterious Google +; Google’s source for contacting sources, connecting, adding to people’s circles, etc.  While I personally find Google+ to be a complete mystery, I can understand why people are avid users. Considering that Google is the most used search engine and emailing source in the world, adding people on Google+ offers a quick, easy, and convenient way to get in contact with bloggers across the world. Derek Miller, one of our Outreacher’s and my desk neighbor, has this success story about using Google+:

“I was actually introduced to Google+ Chat by a blogger after I had sent an article for approval. I hadn’t heard anything back in a couple days and I see a message pop up on my screen from her asking for a few edits. We talked back and forth for several minutes and began to develop a nice rapport. It was much quicker and easier than sending professional emails. She ultimately placed that article and two other ones on her other sites. Google+ Chat is a great way to quickly and easily build trust with bloggers.” – Derek Miller

Social Media is Great – But Email is King

Overall, I think that email will ultimately reign as means of contact between Outreachers and Bloggers; however it’s important to understand how to use Social Media to boost your opportunities and also allows you to gain a greater following from others. I’m curious to see what other forms of social media will be used during my time here at CopyPress. And I think the best part of all about using Social Media to connect with bloggers – is you get to have fun while doing it!

In the wake of Apple’s introduction of the iPhone 5C and 5S, I would like to stand atop a soap box for my... 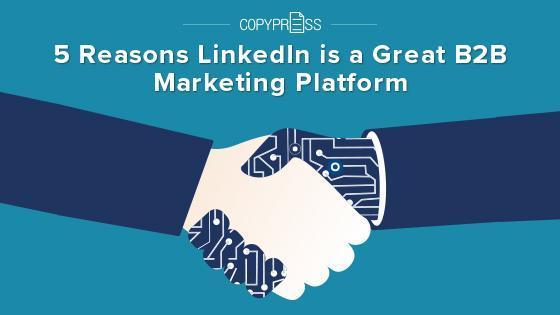 LinkedIn is often the forgotten social media platform. Although business-focused, it’s still considered to be a type of social media. Perhaps the biggest...