The Mind’s Eye – What does yours see? 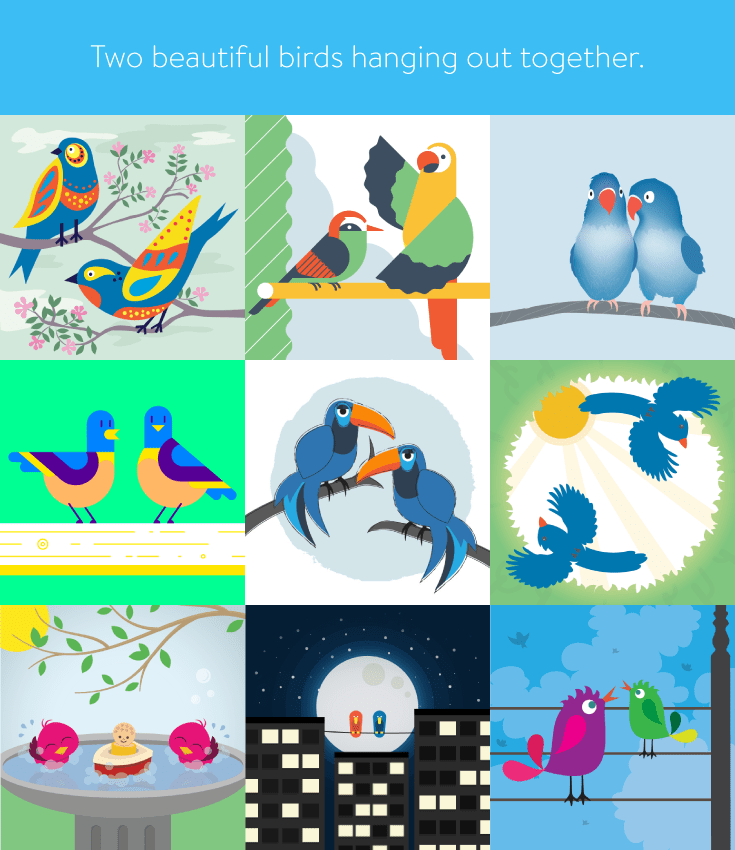 Try an experiment with me. What do you see in your mind when I say, “create an image of an exotic bird with a colorful beak resting on a tree branch in the rainforest”?

Did you see this?

Or something else entirely?

We asked 9 designers, all of varying skill-sets, this same question.

We did and yet we did not know what to expect. This was an experiment, and like your average scientists, we had a question and a hypothesis we were out to prove.

Our Main Question
Was it possible to create a reflection of an image seen in one’s mind to another’s hand?

Other questions we had were:

Our Hypothesis
We believed it wouldn’t take a novel to effectively communicate the image to our designers — we believed that only using vivid and sensory provoking words would accomplish our goal. As far as colors we presented all that we saw, but kept it topical. i.e. the word “Blue” was used, instead of “Pantone 185”.

Isn’t it funny how everyone basically drew an image of a Toucan? Though we never said the word “Toucan” once in our description, did we?

We were expecting similarities in the submissions, but were blown away by this one.

Words like “exotic” and “colorful” resonated with the designer’s sensory perception. And describing the environment clearly as a “rainforest” gave the designers a united vivid image.

But we didn’t stop there.

So, we did pretty well explaining the first image we showed you above. But what would happen if we weren’t so good at explaining what we saw in our mind? What if we used vague, broad language that didn’t really guide the designers down the right path or paint a clear picture?

Try another experiment with me. What do you see when I say, “Two beautiful birds hanging out together” ?

And as for color, use CopyPress brand colors (just look around this blog post) but also add other colors to make the image really “pop”.

Did you see this?

After all aren’t the two birds above beautiful? Don’t the colors just “pop” out at you? Can you see how the CopyPress blue is there in the bird’s wings? And they seem pretty chill — they’re just your average birds hanging out together. Right?

The results are all over the place. You have all varying sizes, shapes, and colors of birds. They are in  all different kinds of settings and attitudes. Some are flying, some are on wires, some are in the forest, some in the city, and some are even bathing! One image is even two different birds entirely.

But all of these birds are beautiful. Yes?

And all of these birds “pop” don’t they?

All of these birds also work with a varying shade of that CopyPress blue?

I think that’s a resonating yes.

So our question was answered.

We could create a reflection of our image in the mind of a designer. And we didn’t have to write a novel to do it. Neither did it matter how talented or skilled the designer was nor did it matter the designer’s personal aesthetic taste. The image of the toucan was accurately represented in each designer’s submission.

But there was also this underlying point my colleagues and I saw throughout this experiment.

And that was the beauty of artistic difference and interpretation.

While you may say one toucan looks better than another toucan or is more accurate/correct–you only have to turn to your neighbor to find that they may disagree. Artistic interpretation is one of the most diverse, widely misunderstood and argued enigmas that exists today. You cannot call the last artist’s toucan not as much a toucan as the first. You cannot say the first artist’s birds are not as beautiful as the last artist’s birds without argue.

It’s something really important to keep in mind while working with artists. There will always be someone’s aesthetic you prefer, admire, or just plain like better than another’s. It’s not to say one is more talented or better than another–though I’m not saying this case doesn’t exist–but there is a much more basic concept beneath it all. It sometimes is as simple as finding someone who can express the world artistically as your own mind sees, experiences, or feels it.

Now isn’t that some food for thought?

I encourage you all to go work on those vivid, sensory provoking descriptions. I even encourage you to try this experiment with your friends or as an exercise at work with your colleagues! The results are bound to entertain.

Special thanks to the designers who helped us out with this experiment!