White Paper: The State of Freelance Writing in 2014 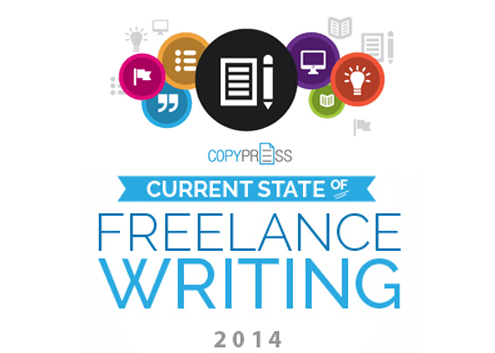 A few months ago we anxiously shared our freelance writing survey and successfully collected responses from 247 survey participants. Last week we released an infographic with some of the data and results of the survey responses. We also released a full white paper for the state of freelance writing in 2014 on CopyPress Community the same day. You can access the paper for free as a member of Community, and if you aren’t a member, you can grab a free copy by registering for Community – which is also free.

I won’t to get caught up in the details and examples of the feedback we’ve received, but if you’re curious to know more on the reactions,  I’d suggest checking out Raubi’s latest article published yesterday on Community’s blog.

Learning From Our Mistakes

The situation with the negative feedback and flustered critics has certainly taught us a lesson about how we market survey findings. But it also taught us a bigger lesson on how we approached both the infographic and the white paper, and how we didn’t anticipate anything but a positive response to our findings.

The white paper was the true piece of content that we wanted to feature and share, but we also wanted to have a condensed and pretty version of the data that was easier to share, and more visually-stimulating –  thus the infographic was born to help us promote the white paper.

Raubi and a few other CopyPressers dissected the survey data and researched industry trends for weeks and months to create the white paper, in an attempt to better define the industry’s terminology, and to make sure our Community of writers (and writers elsewhere) know that there are content companies out there that genuinely want writers to succeed. Our goal was to bring to light the misconceptions and expectations that exist between freelance writers, publishers, and advertisers.

One of the big points we hit on in the white paper was how to differentiate between a writer, and a copyist.

“Online marketing busted open a large new business boom for writers – online copywriting and SEO writing. But while these were labeled as writing jobs, they weren’t jobs for traditional writers and authors. These were jobs specifically for the new breed of writers – the copyists.

Copyists, those mostly interested in finding ways to make money online, began to call themselves writers, creating a confusing landscape where the philosophical and monetary value of the written word was skewed.” – State of Freelance Writing in 2014 White Paper

Not only were we set on cleaning up the terminology of the freelance writing industry, but we also were interested to know how knowledgeable our surveyed writers were on certain topics, like Google Authorship bylines, and Google’s Penguin update.

We also wanted to know what writers struggle with: What challenges do they face as freelancers? What matters to them most when finding work? Is a lack of health care benefits something that burdens them? How many times per week on average do they spend writing for their site/blog? What other types of content do they think has the biggest value? The list of questions goes on…

These are just some of the questions we asked the survey participants. All of our questions were developed and written to better know and understand freelance writers so CopyPress, as a company, can be a better partner and offer better opportunities to writers in our Community and everywhere. Together with happy and successful writers we can create high quality content that shines and converts.

If you’d like to read the full State of Freelance Writing in 2014 White Paper,  you can access your free copy by registering for CopyPress Community here. We hope you enjoy it as much as we enjoyed creating it.

While we’ve encountered some less than desirable feedback, we’d love to hear what you think of the infographic and of the white paper. Do you think the infographic is a distraction or misrepresents the survey data? Did you love it? We want to know!