Why I Stayed: My Journey at CopyPress 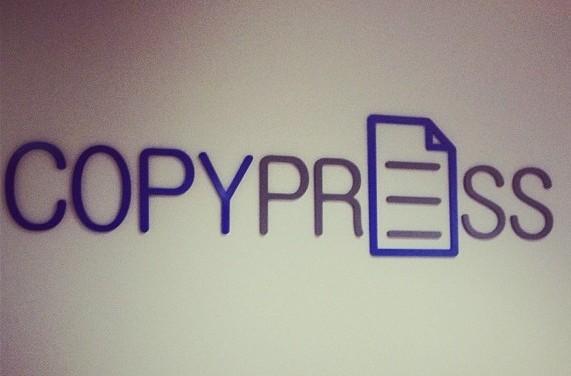 Yesterday I had a bad day at work.

As I walked downstairs to go home, I felt frustrated. I felt overwhelmed. I felt mentally drained.

But while I was walking out to my car, I wasn’t feeling bad for myself. I wasn’t cursing CopyPress or getting ready to go search the classifieds. While I was walking downstairs, I was thinking about one thing: solutions for tomorrow.

Sometimes it isn’t easy being a CopyPresser. We are a baby start-up in a highly competitive, ever-changing, results-driven industry. We are learning as we go and grow. We are innovating and evolving and solving complicated problems. It’s fair to say we have had our fair share of growing pains.

I know that better than most.

I started working with CopyPress in September 2011. I quit my job at a law office to pursue my passion with an internet marketing company I had never heard of.

Changes needed to be made — both logistically and financially. The new plan to resurrect SteelCast meant a few things:

1. The company would move forward with a new direction, focused on CopyPress (which at that time had only 6 staff members).

2. Almost all of SteelCast staff members would need to take a 20% salary pay cut in order to keep the company afloat.

I say almost, because not all of us were cut by 20%. Myself, along with one other creative staff member and upper management were taking a much heavier hit to our salaries.

If I wanted to stay with CopyPress, I would have to go down to working two days a week for three months. All with the hope and faith that after three months, I would be able to return to full-time status along with everyone else in the company.

Most people in my life told me to get another job, find something new. Even Dave Snyder our CEO.

In his words, he completely understood if I didn’t stick around. He would understand if I couldn’t stay but hoped that I did.

It sure wasn’t easy. Cut pay and cut hours meant less people working less time trying to complete more work with less resources and monetary initiative. To say it was difficult is an understatement.

But during that time, we came together as a company (those of us who chose to stay). We weren’t fueled by cash, we were fueled by something else.

And yesterday, when I was fumed and tired and beat down, I thought about that time. And on a parking pass scrap of paper in my car, I scribbled down why I (and seven others) stayed.

Because I Want To Be a Part of Creating Something New

There is nothing more special than creating something that hasn’t been previously created by someone else. CopyPress is doing that and I feel so lucky every day that I get to be a part of it. I knew that I couldn’t leave CopyPress because if the company was going to become successful by creating something new, I wanted to be able to say I helped build it.

Because I Hate Job Descriptions

I have never had a full job description at CopyPress. When I was hired, the job duties listed on my HR documents said “as described during the interview.” I wouldn’t have it any other way. I hate being boxed in and limited in my job responsibilities. I like crossing over and taking on work outside of my “defined” role. Not everyone can handle that type of cross roles workload, but I thrive off of it.

Because When I See Problems, I Want to Fix Them

I don’t want a job where there are a bunch of defined processes that I have to follow with no room for providing feedback or criticism. I want a job where I can be a part of coming up with new, improved processes. I want to identify a problem and be proud when I help fix it.

As I mentioned, CopyPress is a baby start up. There is nowhere to go but up. I knew that if I stayed with this company, no one was going to hold me down in a position but me. I like to be in control of my own destiny, and at CopyPress, I have been able to grow by good old fashioned hard work.

Because I Want a Career, Not a Job

When I first started to learn about CopyPress, I had my doubts. I had bad past experiences with online content development companies so my guard was up. But after learning more about the company, I found that they were really fighting for writers (and other creatives), rather than looking to exploit them. CopyPress is shaping a world for creatives, and as a creative, I need to be a part of that fight.

During my time as a part-time employee, I knew that however difficult it was for me, it was more difficult for management. Of course they didn’t want to cut our salaries. They didn’t do it so they could hoard more money for themselves. They did it so they could pool money for everyone else. Those of us who stayed enabled others to be able to stay. We all pitched it to succeed as a group, not as individuals.

I literally started this post with a rant about my day, but I am in no way worried that my boss is going to come down on me for it. At CopyPress, you are allowed to be exactly who you are. You don’t have to hide your feelings or personality to fit some type of perfect employee, pencil skirt and all smiles. You can be who you are and say exactly how you feel.

Because If It Was Easy, Everyone Would Be Doing It

Because Even When I Have a Bad Day, I’m Still Looking Forward to Tomorrow

Yesterday I had a hard day. I wasn’t alone.

I’m sure other people in the office had a hard day too. I’m sure some of them felt tired or drained.

And rightfully so. Those people worked their ass off.

And when I say staff members, I mean STAFF MEMBERS.

Yesterday I had a rough day at CopyPress, but no matter what, it was still a great day.