The infographic is one of the most visually interesting pieces of content you can create. It provides a vibrant alternative to standard text-based content. It also gives you a vehicle to more effectively convey information. Have you ever wondered about the history of infographics? It goes back further than you may think! Today, we’re covering topics like:

What Is an Infographic?

An infographic is a visual piece of content. It presents images, facts, statistics, and other media in a concise format. Infographics make large sets of data more easily digestible. They use text, charts, and icons to present information in an interesting way. You can create an infographic on almost any topic with the right planning and strategy.

Related: How To Create an Infographic That Gets Noticed 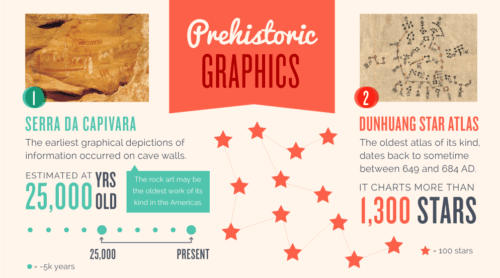 We can thank our really, really ancient ancestors for the idea of sharing information through symbols and visuals. Some of the earliest graphic depictions of information appeared on cave walls in what is now Serra Da Capivara National Park in Brazil. This rock art may be the earliest work of its kind in the Americas. The Bradshaw Foundation, a non-profit organization dedicated to discovering, documenting, and preserving ancient rock art around the world, estimates these particular designs are over 25,000 years old.

In the Middle Ages, charts and graphs started to become more popular forms of communication, but only for certain topics. Scientists and mapmakers were best known for engaging in this kind of communication. In the early 20th century, archaeologists found a secret cave, known as the “Library Cave,” outside of Dunhuang, China. It contained over 40,000 manuscripts, paintings, and documents. One of which was an astronomy chart that dated between 600 and 700 AD. It showed a complete representation of the Chinese sky, documenting over 1,300 stars. This information still helps modern astronomers today. 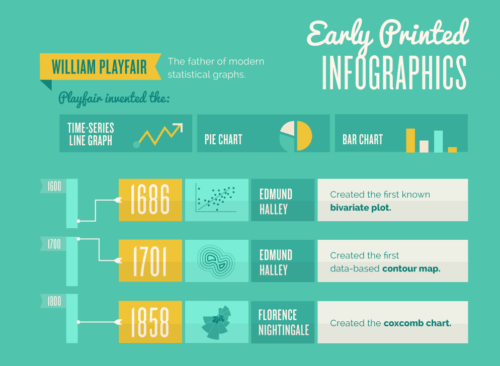 After the invention of the printing press in the 1400s, it became easier for people to write, draw, and widely share information. This tool encouraged some great minds of the 17th, 18th, and 19th centuries to share their findings, like:

Though best known for his association with astronomy and the comet named after him, Halley also contributed to fields like meteorology, physics, mathematics, and yes, even marketing and content creation. In 1686, he created the first bivariate plot (sometimes known as a scatterplot or x-y graph) based on observational data about barometric pressure and altitude. We still use these charts today when sharing data in infographics.

Just 15 years later, in 1701, Halley was at it again developing more types of charts and graphs to visually explain the world around him. He developed the first data-based contour or topographic map. It took mathematical information like elevation into account when drawing a two- or three-dimensional object or place on a one-dimensional plane.

Scottish engineer Playfair earned the nickname “the father of modern statistical graphs” because of his numerous contributions to the field. Any time-series line graph, pie chart, or bar graph you’ve ever encountered on an infographic all comes back to him. He created them in the 1700s and 1800s to depict data he collected as a political economist and secret agent during the French Revolution.

Not just a nurse, Florence Nightingale was also a statistician. She invented the coxcomb chart, or rose diagram, in 1858. A cross between a pie chart and a bar graph, the first one helped her document the number of unnecessary deaths during the Crimean War that resulted from preventable infections. Though used less often than other kinds of charts today, her contribution shows how the evolution of data visualization forged forward on the way to the infographics we know and love. 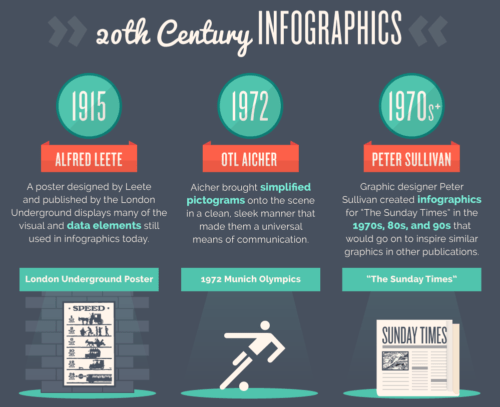 Starting in the early 20th century, advertisers and marketers started using data visualization to promote their initiatives. Artist Alfred Leete was one of the first in 1915. He developed a poster to hype the London Underground. It depicted six different modes of transportation and the speed they could travel. It showed that the subway system could travel faster than any other available mode of transportation at the time. The 1970s brought huge advancements in infographics as we know them today. In 1972, Otl Aicher introduced a set of pictograms to the world.

He designed them to help spectators at the Munich Olympic Games find their destinations, no matter what language they spoke. He also designed signage for the Frankfurt Airport, and developed concepts we still use today, like the geometric people icons. British graphic designer Peter Sullivan brought infographics to The Sunday Times, starting in the 1970s. He used them to explain events in major news stories and provide more clarity for readers. His work inspired other publishers to invest in infographics for their audiences. 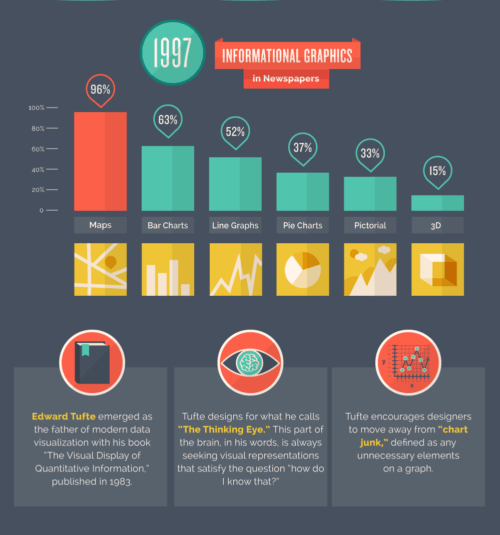 Building off the work of others, Edward Tufte published a book called The Visual Display of Quantitative Information in 1983. It gave a detailed analysis of how to display data for human consumption and how doing so could edit and improve graphics. He encouraged designers to remove unnecessary elements from charts and graphs. He also developed the design concept of “The Thinking Eye.” Tufte noted that this was a part of the brain that always looks to find a visual representation to prove how a person knows something. This work earned him the nickname “the father of modern data visualization.”

By the 1990s, encouraged by Tufte’s work, many other publications took after Sullivan and started using data visualizations with their stories. By 1997, 96% of data visualizations in newspapers were maps, followed by bar and line graphs, pie charts, and pictorial representations. At the time, just 15% of visualizations were 3D because it was difficult to transfer that kind of visual to a flat plane.

The launch of the World Wide Web in 1991 opened the gateway of public access to the internet. And like with other information mediums that came before it, visual data representations eventually made their way there, too. The internet made it possible to incorporate features into infographics that were impossible in print. This includes things like motion graphics and interactive media that change based on how a user browses the website.

Related: A Guide To Interactive Marketing (With Examples) 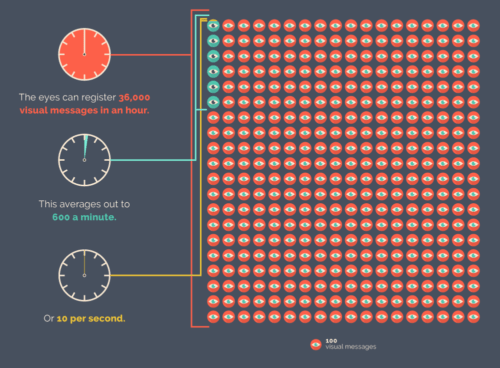 What does the increase in visual media and data representations mean for how we, as marketers, interact with our audience? Sources say that as much as 90% of the information your eyes capture and your brain sources is visual. This could be because 40% of the fibers in your brain are attached to your eyes and sense of sight. That means the human brain is designed to see, understand, and remember visual material as a natural instinct.

Our eyes register 10 visual messages every second. That’s 36,000 per hour. If that sounds like a lot of data, it is. But because the brain does this process naturally, it doesn’t feel overwhelming to viewers. Marketers can take advantage of that comfort zone of human data collection. By creating materials that work with the brain’s natural processes and sharing your information in those ways, you’re making your material more digestible for viewers. This can help them retain what they learn about your company, products, or services. 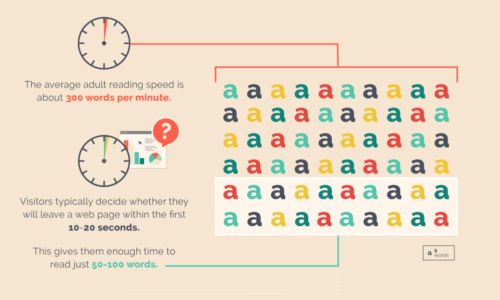 When we think of content marketing, we often think of words first. Blog posts, resource articles, and eBooks often dominate the playing field. Visuals are complements or secondary sources of information. But should this be the case? The average adult reading speed is about 300 words per minute. That means it takes the average adult about 7 minutes to read a 2,000-word article. That’s not too much time to dedicate to consuming information if you’re interested in it. Or is it?

Content visitors typically take just 10 to 20 seconds to decide whether they’ll stay on your page and consume information or navigate away. That only gives them time to read about 50 or 100 words of a text article. In that same span of time, they could take in 100 to 200 visual messages. If you’re looking for the most impact in the shortest window, visuals have words beat. But, in general, the two strategies still work best when used together to capture the widest audience possible.

The Future of Infographics 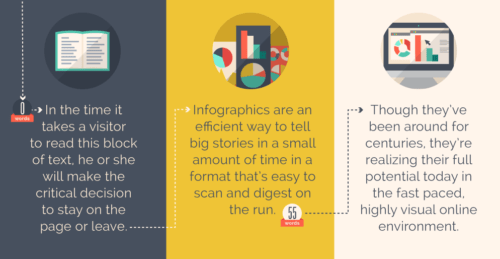 Infographics have been evolving for centuries, but where will they go next? The next great update to how we create and use infographics could come from the next breakthrough in technology. As new content marketing channels develop, marketers, designers, and the public will find new ways to create and consume information. The current rise in artificial intelligence (AI) and virtual reality (VR) could be clues to the next advancement for infographics. Or, the next breakthrough could be something we haven’t even imagined yet.

To stay up to date on the latest infographic and other content marketing hot topics and trends, subscribe to the CopyPress newsletter. Get this type of information and more delivered right to your inbox! 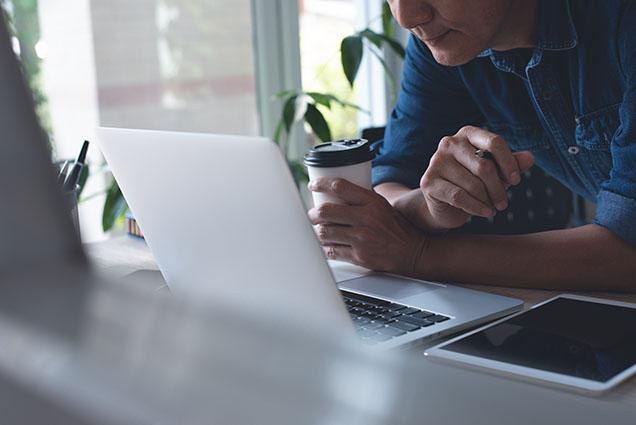 Fresh insights and tips on content marketing every week

The History of Infographics [Visual]

Infographics are still growing and changing every day. Including infographics in your content strategy can attract your target audience so you can build your brand awareness and increase leads. Combining other forms of content, like blogs, articles, white papers, and eBooks with your infographics can really help your target audience connect with your brand even more. As a content marketing agency, CopyPress offers the content writing your business needs to engage with potential customers and clients. Start a call with us today to see what we can do for you.